The first case of ASF in wild boar was confirmed on September 10th in Germany, since then the number of cases has increased to 150 on November 13th. How will this confirmation influence the world trade market, in particular imports from China? This is the question asked by Angela Zhang, Head of Business Intelligence Division, IQC Insights, in a recent article for the pig industry magazine The Pig Site. According to the article, the arrival of the virus in Germany could turn the global pig market upside down.
The article cites that in 2020, the volume of pork imports from Germany to China increased by 81% in the first seven months, compared to the same period last year, and yet in July of this year it was still exceeded by the US and Spain in both pork and pork offal. This now raises the question: which exporters could fill the gap caused by the German absence from the Chinese pork import market? 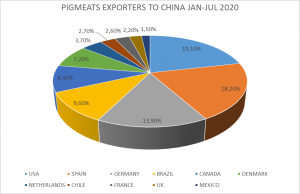 According to IQC INSIGHTS, among European exporters, Spain is undoubtedly the most potential candidate, due to its pork production capacity and the fall in domestic consumption. Spain’s exports to China only represented 13.8% of its market, although this figure is expected to increase thanks to the higher profit margins in the Chinese market. Furthermore, the increase in stocks of and greater investment in slaughtering and cutting facilities would also provide strong support for the export boom. The lower production capacity in Denmark and the Netherlands makes both countries less competitive than Germany and Spain, and both countries base their exports on weaning, especially to Germany, so transport of these could be reduced due to the risk of ASF infection.

As far as the American continent is concerned, Angela Zhang highlights the role of the USA, Canada and Brazil. The analyst points out that Canada exported almost 64% of its pig production last year, so its margin for growth is much smaller than that of the EU, the US or Brazil. The latter two have a similar percentage of export dependence, but USA has the greatest production capacity.

The article goes on to say that despite the fact that the US and Brazil have a similar rate of export dependency, the US takes advantage of greater pork production and slaughter capacity, making the US country even more competitive than Spain in this respect. However, there are other factors that would negatively affect the US, such as the lower reputation of US products compared to German products, or for example that according to EU regulations, pork from unaffected German regions can still be marketed in member countries.

Finally, it is stressed that at this point in time other factors should be taken into account which could favour the balance of exports to China in one country or another, such as the negotiations of the German authorities with China so that the import ban is only regional and does not affect the whole country, the possibility of contagion from other European countries, the poor trade relationship between the US and China, or the advance of COVID-19 in countries which dominate exports to China such as Spain, France, the Netherlands or the US, the main focus of the pandemic at this time. They also cite the fact that Belgium will soon be granted ASF-free status, and China could therefore lift the ban on its imports. 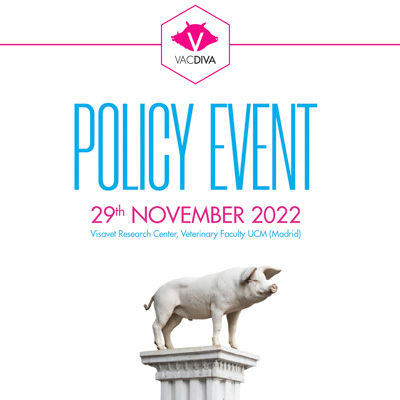